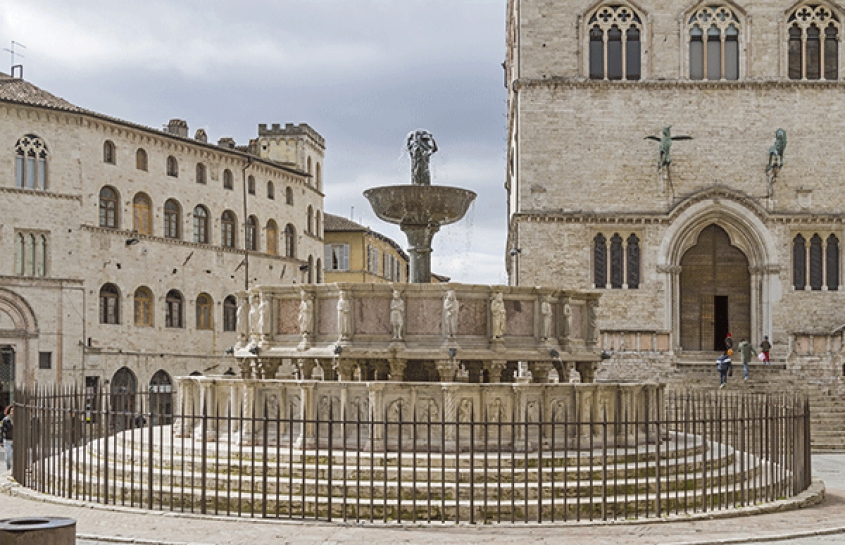 The Fontana Maggiore (1275-1278) is one of the main monuments of the city and of medieval sculpture in general. It consists of two concentric polygonal marble basins surmounted by a bronze cup. The two concentric polygonal basins are decorated with bas-reliefs finely sculpted by Nicola and Giovanni Pisano. In the lower bas-relief symbols and scenes of the rural tradition and the feudal culture are represented.  The months of the year with the zodiac signs, the liberal arts, the bible and Rome history are also included. In the upper bas-relief at the corners are depicted biblical and mythological characters in statue form.

Arco Etrusco: Represents the largest Etruscan monument still existing, it’s the gate of the Etruscan walls (IV-III century BC) and is oriented north. It’s adorned with mighty lateral bastions made ​​of megolithic blocks of travertine stone (average size 100×60 cm). The left buttress is topped with the elegant Renaissance loggia and is adorned at the seventeenth-century base, in its turn is surmounted by two typical Etruscan fouls. On the round arch is engraved “AUGUSTA PERUSIA”.

Rocca Paolina: Together with Fontana Maggiore and Arco Etrusco represents a significant city monument. With its troubled history and architectural interventions, it represents a unique monument. It was a military fortress erected by Pope Paul III in 1540 at the end of the Salt War – which was an unsuccessful rebellion of the city against another Papal taxation – in this case a salt tax. It was built after the demolition and the incorporation of an entire district of the historic center. It was covered with sixteenth century vaults, which were later demolished during the Renaissance and finally buildings as well as a nineteenth-century garden were built over it. The garden being the work of Sangallo the Younger, one of the greatest military engineers of the sixteenth century. The demolitions occurred after the unification of Italy, which destroyed 3/4 of the original Rocca Paolina which extended from the current Piazza Italia to Largo Cacciatori delle Alpi. Today the massive undergrounds with the bases of the medieval buildings that, together with Porta Marzia (other major gate of the Etruscan walls, which are still visible along Via Marzia), were incorporated into the fortress. Today Rocca Paolina is crossed by an escalator which connects Piazza Partigiani to Piazza Italia.

The Pozzo Etrusco (Etruscan Well) built in the second half of the third century B.C.  in ancient times was the main water source for the city. About 40 meters deep it and is located in Piazza Danti.

Palazzo dei Priori an excellent public building from the municipal age, it was built between 1293 and 1443. Gothic in style and is accessed from the main square, through a thirteenth-century portal decorated with the statues of a griffin and a lion. It extends along Corso Vannucci and it is still today the Town hall. It houses the Sala dei Notari, a medieval hall characterized by large arches and frescos.

Teatro Morlacchi (1777-1780), previously known as Teatro del Verzaro is the largest theater in the city. Designed by the architect Alessio Lorenzini it has a horseshoe shape, four tiers of boxes and a gallery.

Cathedral of San Lorenzo was built between 1345 and 1490. The external covering was never fully realized. The interior is a Hallenkirche type and here is preserved the Holy ring, the relic of the wedding ring of the Virgin Mary. The most important work kept in the cathedral is the Deposition from the Cross by Federico Barocci (1569).

Basilica of San Domenico, founded in 1304 and totally rebuilt on a design by Maderno in the seventeenth century, is the largest religious structure in Umbria and it represents a fourteenth century masterpiece of sculpture. The basilica houses  the tomb of Benedict XI. Of great value is also the wooden choir from the late fifteenth century and the apsidal window made in 1411 is the second-largest in Italy (22×8 meters), with the apsidal window in Milan’s cathedral being the largest.

Basilica of St. Peter was built at the end of the tenth century over the previous cathedral, which was the first bishop of Perugia, in existence since the seventh century. The entrance to the church is on the left side of the seventeenth century cloister. The polygonal bell tower, built between 1463 and 1468 in Florentine Gothic style, dominates the basilica.

The Complex of San Francesco al Prato was erected in the first half of the thirteenth century and its architecture is similar to that of Santa Chiara in Assisi. Recently, after the roof’s collapse, it has undergone a radical restoration and has been adapted as a musical and theatrical auditorium.

More in this category: Sagrantino: Umbrian Soul »
back to top