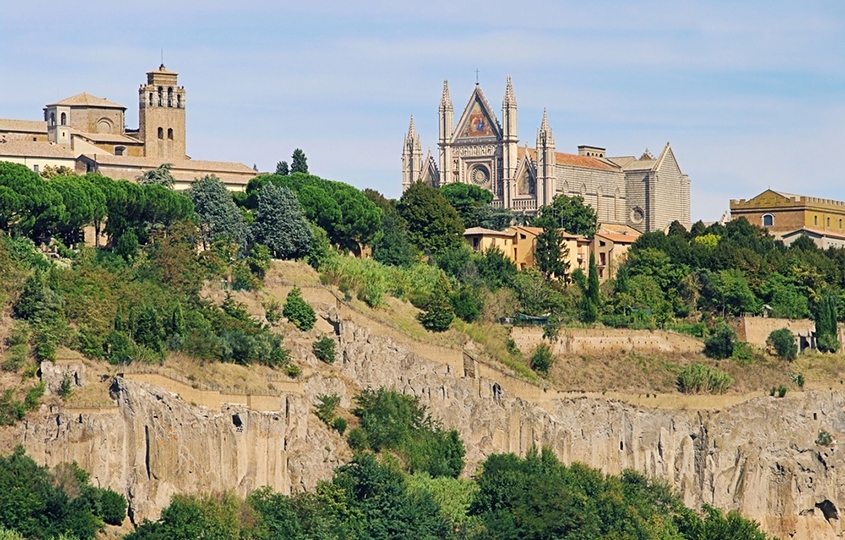 Orvieto’s origins date back to the Etruscan period: the first settlements are from the 9th Century B.C. and were located inside tuff caves dug out of the rock on which the city currently stands.

After being annexed to Rome in the third century B.C., Orvieto remained under Roman rule until the decline of the Western Roman Empire. It subsequently became a free commune and during the conflicts between Guelfi and Ghibellini Orvieto strongly opposed Barbarossa, remaining loyal to the Pope. Held in high regard by the Papal State, Orvieto prospered throughout the middle ages, reaching the peak of its development in the 13th century with the constitution of the General Council in the 1400s and the election of the Capitano del Popolo (People’s Captain). During this period fervent work was carried out in the construction of palaces and religious buildings, among which the famous Duomo, dating back to 1263, stands out. With its splendid gothic façade and with the richness of the decorations and the internal chapels, it is the city’s most important architectural testimony.

In the ancient city we can find Saint Patrick’s Well, (built in 1527 in a project by Antonio da Sangallo the younger), the 14th century Palazzo dei Sette, the Palazzo del Capitano del Popolo (12th Century) in which the Public Council meetings were held, the churches of Sant’Andrea (12th century), San Domenico (13th century) and San Giovenale (11th century) and the Palazzo Soliano (1262) which holds two museums -the Museum dell’Opera del Duomo (Museum of the works of the Cathedral) and the Museum of Modern Art. Moreover, the impressive underground city and the Necropolis of the Tuff Crucifix dating back to the Etruscan period are not to be forgotten.

More in this category: « Castiglione del Lago Spello »
back to top